by Joseph Erlic April 26, 2019
All I could hear was the thundering roars of over 2,000 hyped up spectators packed into our high school gym, doubling its capacity.

Nothing was advertised but there were rumors of a home town legend making an appearance at his old stomping grounds.

The warm up began with a layup line. I finished a silky smooth reverse layup off the glass and I could feel overwhelming electricity coming from the crowd.

I turned around and realized nobody gave a dam about my so called silky skills.

STEVE NASH just entered the building and tossed up a feathery and lethal alley-oop to his old teammate from grad class of 92’.

It was my senior year and coincidentally the same year as the NBA lockout. Every November the school puts on a graduate vs student basketball game.

Never had it been this exciting though.

Here’s how play against Steve went down. 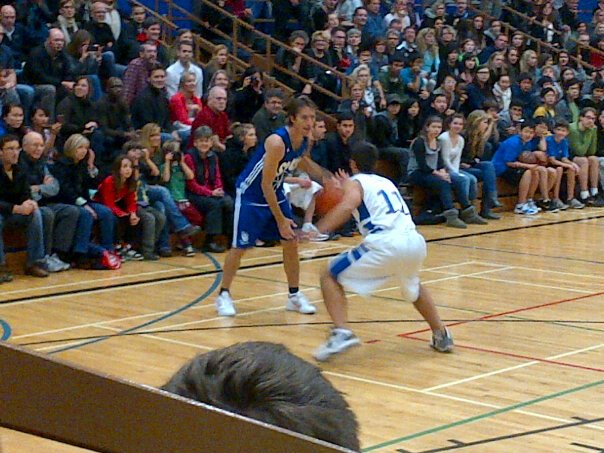 First of all, I was terribly confused when I couldn’t hear his footsteps. He glided across the court and effortlessly got to any spot he wanted so he could drop the perfect pass to his teammates.

It was special to watch.

I guarded him the whole game and I would be lying if I said I wasn’t a little bit star struck.

A piece of me regrets not taking this once-in-a-life-time opportunity to get in his grill and challenge him.

Looking back on it, I wish I tried to take him on 1v1 or pressure him harder on defense.

Just so I could force him to give me a true NBA schooling.

But that’s life; you can’t go back in time!

All you can do is move forward and learn from the past, apply it to what you’re doing today, and make sure you don’t make the same mistakes.

If I learned anything from Steve, it would be enjoy what you’re doing, work hard and take your chances.

And if you want you and your kids to have an experience that’s almost just as cool as playing against 2X NBA MVP Steve Nash then click here and check out our product. It was specially designed to get people outside and active by adding serious excitement to your driveway.

Joey Erlic
Back to News